Home » About Us » Management Team

IntegraGen's management team has significant experience and expertise in the development and implementation of genomic research projects and the commercialization of molecular diagnostic tests.

Dr. Courtieu joined IntegraGen as CEO in 2007. Prior to joining the company, he achieved significant success in the role of Practice Leader and later as Vice President within Gemini Consulting’s Life Sciences Divison in France. During his tenure with Gemini Consulting and Cap Gemini Ernst and Young he yielded hands on experience in improving the operational performance of pharmaceutical companies in the fields of research and development, industrial operations, supply, sales and marketing and information systems. Previous to this, Dr. Courtieu held the position of Country Manager, France at Ariba, the world leader in spend management. In this role, he assisted companies in analyzing and managing their corporate spending in order to achieve increased business proficiency. Dr. Courtieu holds an MBA from the Instituto De Las Estudios Superiores De La Empresa, in Barcelona, Spain. He recieved his doctorate in Veterinary Medicine from the Ecole Vétérinaire d’Alfort and University Paris Xll, France.

Ms. Riot Lamotte joined IntegraGen in 2011 as Chief Financial Officer. She is former CFO of Aureus Science and LBMA. Her previous positions at Deloitte in the Audit Department and at Thomson brought her wide operational and international experience, which led to expertise in strategic financial spheres. She has also managed several projects for the Deutsche Telekom French Subsidiary. Ms. Riot Lamotte has a degree from CESEM management school (RMS group) and holds a German “Diplombetriebswirt”. She also holds a Masters’ Degree from Paris-Dauphine University in the field of Management of Telecoms and New Medias.

Mr. Martin joined IntegraGen as Director of Sales & Marketing for IntegraGen Genomics in 2006. Mr. Martin is responsible for the development of IntegraGen Genomics by proposing high quality services direct at the research community in the field of genotyping, high-throughput sequencing and bioinformatics. He previously worked for eight years as Senior Sales Specialist in SNP genotyping and gene expression, and then as Business Developer and Research Field Engineer in real Time PCR at Applied Biosystems, Applera. Mr. Martin also has over four years of research experience in molecular biology. He is a graduate Pharmacist and obtained a Master Degree of Applied Studies on Oncogenesis from the University of Paris V, France.

Mr. Yost joined IntegraGen in 2009 and is responsible for the company’s activities in the U.S. He has over twenty five years of domestic and international experience with both small venture-capital startup companies and large multi-national organizations. Mr. Yost is a results-oriented leader with a proven track record of bringing change technology to the market and interacting with key opinion leaders to drive the adoption of innovative technology. Prior to joining IntegraGen, Mr. Yost was the Vice-President of Sales and Marketing for Expanding Orthopedics, a venture-capital backed company developing novel medical implant technology for spinal fusion and orthopaedic trauma. Mr. Yost has also previously led marketing teams at Salient Surgical Technologies and at Vasca Inc. Larry began his career as a sales representative and then as a Medical Sciences Liaison at the Upjohn Company (subsequently acquired by Pfizer), followed by a global marketing role with Baxter Healthcare. Mr. Yost has a Bachelor’s of Science Degree from the Purdue University School of Pharmacy.

Ms. Génin joined IntegraGen as the Director of Bioinformatics in 2010. She provides her expertise in bioinformatics to IntegraGen Genomics activities by performing analyses and development of web application adapted to the need of researchers and clinicians in the field of SNPs genotyping and high-throughput sequencing. She has started her carreer at Sanofi in 2002 where she worked for eight years as a bioinformatics scientist within the Human Centre of Genomics in Evry. She has also previously held positions of Bioinformatics Project Associate at the Pharmacogenomics Centre of Genome Quebec and at the Cardiology Institute of Montreal, Canada. Ms. Génin holds a French Master Degree in Genetics and Bioinformatics. 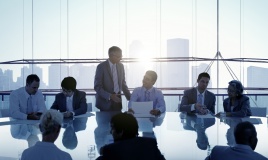 We use cookies to ensure that we give you the best experience on our website. If you continue to use this site we will assume that you consent to use our cookies.Ok